The Mediation Boards Commission (MBC) of Sri Lanka, together with the Ministry of Justice, launched a convenient dispute intake system for the public by introducing a dispute intake box at the Divisional Secretariat level. This is expanding the Community Mediation Boards’ (CMB) Chairperson’s jurisdiction and making it easier for CMBs to receive complaints from the public.
posted on 2022-05-02
All Tech News

The Mediation BoardsCommission (MBC) of Sri Lanka, together with the Ministry of Justice, launcheda convenient dispute intake system for the public by introducing a disputeintake box at the Divisional Secretariat level. This is expanding the CommunityMediation Boards’ (CMB) Chairperson’s jurisdiction and making it easier forCMBs to receive complaints from the public.

The current dispute intakesystem requires the public to hand over their disputes by way of a formalletter to the respective Chairperson in the Community Mediation Board (CMB) inthe area where the disputants are from. However, this process of receivingformal complaints to the Mediation Board was found to be time-consuming, leavingthe public having to face many difficulties in handing over their complaints.  As a solution, the Mediation BoardsCommission decided to implement a convenient dispute intake system. As part ofthe Supporting Effective Dispute Resolution (SEDR) project, The Asia Foundation(TAF) contracted a vendor to design and provide 350 complaint boxes and overseethe delivery of the boxes to 25 District Secretariats.

SEDR is a four-year accessto justice project implemented by the British Council, in partnership with TheAsia Foundation (TAF), and funded by the European Union (EU). The EURO 7million project is part of the EU’s overarching STRIDE (StrengtheningTransformation, Reconciliation, and Inclusive Democratic Engagement) Programmein Sri Lanka.

ThorstenBargfrede, the Deputy Head of the European Union Delegation to Sri Lanka andthe Maldives, said: “Mediation oflocal disputes is an important component of local governance, and it is crucialthat we work to remove any barriers with regards to the efficient intake ofdisputes. A dispute intake boxis an approachable method for the public to hand in their complaints and has the potential toinfluence more people in communities to come forward with their disputes,ultimately leading to increased trust and confidence in communal justice. TheEuropean Union’s funding to Supporting Effective Dispute Resolution (SEDR)project is a part of its commitment to promote dialogue and support localgovernance in Sri Lanka.”

The Honourable Minister ofJustice Ali Sabry said ‘Alternate Dispute Resolution (ADR) mechanisms haveproved to be effective, speedy, and cost-effective in many jurisdictions in theworld. Mediation in particular has the potential in Sri Lanka to ease theburden on the justice system whilst also delivering an acceptable solution toboth parties. This project will make access to mediation easier and alsocontribute to its development as an ADR mechanism in Sri Lanka. I am thankfulto our development partners, the British Council, The Asia Foundation, and theEU in supporting this project and working with the Ministry in taking thisprogressive step.” 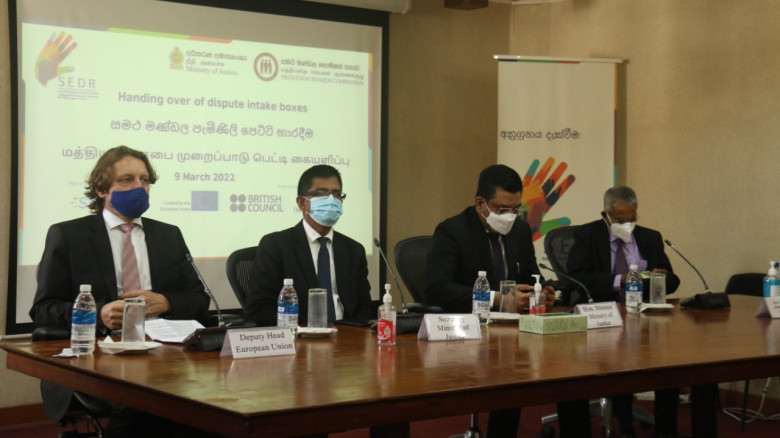 About SEDRSEDR is a four-year access to justice projectimplemented by the British Council, in partnership with The Asia Foundation,and funded by the European Union as part of its Strengthening Transformation,Reconciliation and Inclusive Democratic Engagement (STRIDE) Programme in SriLanka.